Tonight at the BFI, Southbank sees a celebration of the work of the film collective, Cinema Action. After a screening of Squatters (1970) and So That You Can Live (1981), Ann Guedes and Steve Sprung, Cinema Action members, will be present for a Q&A.

Steve Sprung was a key collaborator with Marc Karlin on five films and later contributed to the book Marc Karlin – Look Again.

Here is Steve’s article on Karlin from the summer of 1999. It featured in an issue of Vertigo magazine dedicated to Karlin, who died in the January of that year.

It’s hard to imagine it, the idea of Marc turning in his grave, but surely he must have. May Day… Saturday the first, not Bank Holiday Monday.

Nothing to do with his beloved Arsenal, but with that other, mostly negative, mover of his being, television. In a programme hosted by Jon Snow the British people were allegedly invited to make a late but vitriolic judgement on Margaret Thatcher’s seventeen years in government.

I imagined the rage it would have elicited from Marc – not against the obvious target, Thatcher and her die-hard crew – but against all those claiming it was Maggie who done it, that this she-devil incarnate must now take all the blame. At a time when cleansing, by all manner of powers over other powers, dominates our television screens, this was an equally crude wiping clean. Television’s refusal to engage with the complex process of those years – years which constitute a substantial chunk of our adult lives as well as moulding future generations – would have had him livid.

It was this Thatcher period which formed the context for my work with and for Marc. My background had been in a more agitational cinema, but I had been struggling for years, labouring away in the basement under Lusia Films, with a film about a failed strike under the previous Labour government, and its role in laying the ground for the Thatcherism that was to come. How to talk about events which had been mischaracterised both by the dominant media industry and by the working classes’ own trade union and political organisations? How to reveal this massive content, tell this necessary story, and find an adequate form in which to do it?

This film, The Year of the Beaver, finally emerged in the early eighties. It manages to create multiple layers of meaning, drawing connections between the myriad things it had been necessary to take on board. When he saw it, Marc hugged me. This, I felt, was our first real meeting. On looking again at Marc’s early films, I came to realise they had always been about looking beneath the surface to reveal connections. In a sense they are films which try to open up for the viewer the process we went through as filmmakers, inviting them, as far as was possible, to share the journey we had made. Thus they were films which interrogated their audiences as much as they interrogated their subject-matter, just as we had interrogated ourselves as part of their making.

I worked on five films with Marc. I was one of many with whom he talked at great length about the ideas underpinning each new project. We would try out sequences with video-cameras, and these I would cut and re-cut, often summoned to Lusia by a Saturday morning ’phone call.

I chose not to attend the actual shoots (on 16mm) so that I could come to the rushes with as fresh an eye as possible. It was as if the material had been encircled, caught by the camera. Now the ideas, and the film which would bear them, had to be re-discovered, and brought to life on the editing table. 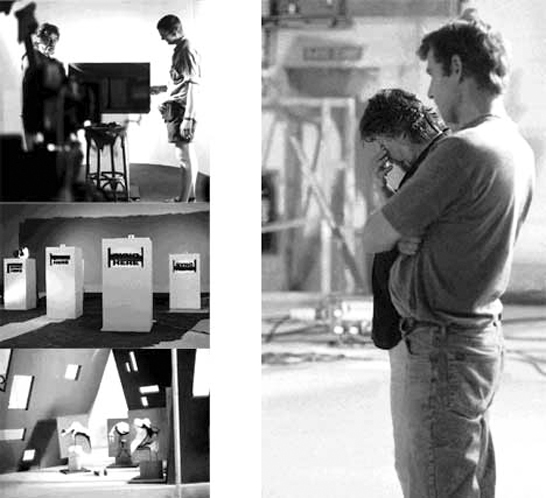 Marc, insecure as he was, as we all are when laying ourselves on the line and taking risks to say more than we readily know how to say, was incredibly secure in terms of entrusting me with the material. When viewing my cuts, he had the sharpest eye for detail, and its relationship to the whole, but he gave me unhindered space in which to work. He never demanded that this or that shot must be used, and was in this sense able to subsume his ego to the film.

Because the films were about something bigger than Marc or any of us who worked on them, and we were simply engrossed in trying to understand how to bring the ideas to life.

Paradoxically perhaps, the first film I edited with Marc was the last of his more conventionally “political” and “documentary” works.

Between Times was a journey through the countervailing political ideas of the “in between times” he felt we were in, and through the sort of questions Marc felt this period posed for anyone still concerned with bringing about revolutionary change. I’ll always remember the end of the film: the two protagonists, who’d been conducting an argument by presenting various documentary stories, were revealed to be one single, contradiction-filled person. But this was a person who held on to a simple truth: when we had none of the technology to construct a new world we had the capacity to dream it; now that we had the technology, we seemed to have lost the capacity to dream the dream.

Between Times was a turning point in his and our filmmaking. Marc moved towards the politics of culture and away from films whose legitimacy derived from concrete documentary material based on ongoing political action. He went for a new type of direct cinema, looking at how the world is culturally constructed and by whom, and exploring the blockages preventing perceptions of the world which are different from those of the more dominant vision. 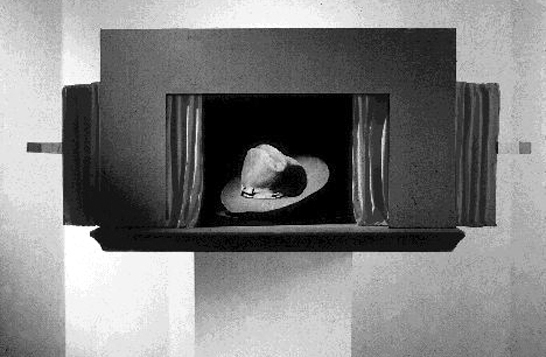 This required a different use of the material basic to documentary filmmaking, an approach which freed itself from following the sequence of particular events or political actions. It was an approach I had begun to explore in a film I had recently co-directed, Men’s Madness, and something which Marc’s practice, and his work with people such as Chris Marker, had enabled him to appreciate. He saw it as a step forward in opening up the political space of cinema, and he continued to develop it further in his films, drawing increasingly on fictional and scripted elements.

In The Outrage, a man goes in search of a painting, or, rather in search of the art in himself. This film shows another aspect of Marc’s work: the supposed subject of the film – in this case a portrait of the artist Cy Twombly – is turned upside down and viewed from an unexpected angle. Thus we are able to look at the subject afresh, to look at art and painting from the point of view of the viewer. We go through precisely the process of re-discovery Marc had gone through to be able to create the film. This journey we, his collaborators, had also shared, leading us to engage with that essential need which emerges as art. Not the art of the market place, but the art that most of us leave behind somewhere in childhood, in the process of being socialised into the so-called real world. The art which still yearns within us.

The Outrage contained an important sequence which talked about the role of advertising (and this includes MTV) in our visual culture. This is the one place where it is permitted for images to be freely given over to the imagination. But here imagination has become no more than a commodity, and the images bear the emptiness of this prostitution. In contrast, the richness of The Outrage’s visual imagery and the imaginativeness of its narrative form are inseparable from an equally rich and meaningful content. The film’s imagery does not flow over and mesmerise the viewer; it asks for a more complete involvement.

Marc’s next film, The Serpent, about the demonising of Rupert Murdoch, continued this rich texturing of image, sound and meanings. I’m sure Marc had experienced visions of Murdoch horned and spitting fire, but he wanted to interrogate that whole process of “demonising” which we all revel in. He wanted, crucially, to look at what it really avoids, to address the difficult political questions it allows us to duck; how to fight against a culture which apparently offers more of everything, more channels, more choices, more democracy, more freedom? and how to ask another simple, yet largely unasked, question – where are all these choices leading? Freedom to do what?

It was during the making of The Serpent that Marc introduced Milton to me and to his films, in the epic form of Paradise Lost. This poem had obsessed him for some considerable time. It speaks of the devil not from a moral perch, nor of him as a foreigner, but as being resident somewhere in all of us. It was more than the text, however, that was rhyming with us. Just as Milton became isolated in his lifetime through his constant search for illumination, labouring to understand why the revolution of his time had failed, so we too were destined to a similar isolation. We had made ourselves outsiders by virtue of our way of working, by the endeavour of Marc’s kind of filmmaking. Perhaps this was the only place we could be. We required an audience who wished to make a journey similar to ours, whereas we live in a society in apparent need of constant triviality, one afraid to take itself too seriously for fear of what it might uncover, and desirous of seemingly “entertaining itself to death”. Perhaps this is the message of Murdoch’s easy victory. 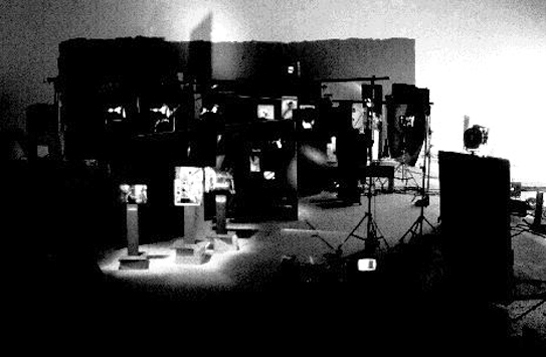 This experience of being outside, witnessing a culture whose memory is in a dangerous state of decay, provided the impetus for The Haircut (a short about the cultural conformity of New Labour) and for Marc’s last work in progress on Milton: A Man who Read Paradise Lost Once Too Often.

Marc was preparing to keep up the fight. Coming from a different space, I had my reservations. The references that resonated for him were different from mine. I also knew he was engaged in a holding operation, perhaps one which few would be able to understand.

The film was not to be.

I can remember a sense amongst many of us present in the pub after Marc’s funeral of this being the end of an era. Would there be space in future for his kind of work? Where would it find its funding?

It seems to me there is an equally important question before us: will we be able, as time goes by, even to conceive of such work? It requires a skill that can only be developed through practice, and a great deal of time – gestation time and, especially, post-production time.

Marc’s are films about a process, and thus they have an organic life to them. They were not made with an eye to filling a television slot, but were designed to take the time they needed to take to communicate the exploration they had undertaken. This is why their significance lingers on beyond the momentary blip they represented in the continuous present that is television, and why they will outlive their own time. They are representations of the complex processes by means of which we come to understand who we are, where we are and what we are.

Steve Sprung is a film director and editor.