In the recent Marc Karlin round-table event at Picture This, Kodwo Eshun remarked this project reflected a current need to return to the archives of what Jean-Luc Godard named ‘Cine-Marxism’. Sheila Rowbotham, the Writer in Residence at the Eccles Centre for American Studies in the British Library and friend of Marc Karlin, was also on the panel. Here is a story where all these figures overlap.

In 1969 Jean-Luc Godard was in London filming British Sounds, a project he was making with Kestral Films for London Weekend Television. He approached Sheila Rowbotham for permission to use her Black Dwarf article, ‘Women: the struggle for Freedom’ written in January 1969 with the front page ‘1969: Year of the Militant Woman?’. His idea was to film her with nothing on reciting words of emancipation as she walked up and down a flight of stairs – the supposition being that eventually the voice would override the images of the body. Rowbotham declined. Consequently, another young woman agreed to walk up and down the stairs and Rowbotham did the voiceover. Here’s a section of the film. 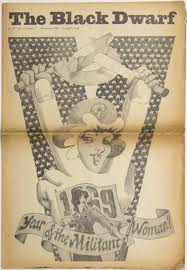 This is an edited extract from Sheila Rowbotham’s memoir ‘Promise of a Dream’ describing the exchange with Godard.

Godard came to Hackney to convince me. He sat on the sanded floor of my bedroom, a slight dark man, his body coiled in persuasive knots. Neither Godard the man nor Godard the mythical creator of A Bout de Souffle, which I’d gone to see with Bar in Paris, were easy to contend with. I perched in discomfort on the edge of my bed and announced, ‘I think if there’s a woman with nothing on appearing on the screen no one’s going to listen to any words,’ suggesting perhaps he could film our ‘This Exploits Women’ stickers on the tube. Godard gave me a baleful look, his lip curled. ‘Don’t you think I am able to make a cunt boring?’ he exclaimed. We were locked in conflict over a fleeting ethnographic moment.

British Sounds was to have an unexpected series of repercussions which I did not grasp at the time. Humphrey Burton, then head of arts at London Weekend Television, refused to show it. The ensuing row fused with the sacking of Michael Peacock from the board of LWT in September 1969. Whereupon Tony Garnett and Kenith Trodd from Kestral, along with other programme-makers, resigned in protest. LWT decided to go for higher ratings and bought in an Australian newspaper owner called Rupert Murdoch. The last thing he wanted to do was to make a cunt boring.

This is a still from Marc Karlin’s The Serpent, a film on Rupert Murdoch 28 years later.

Sources – Promise of a Dream: Remembering the Sixties. S,Rowbotham. (Verso:2002)

Error: Twitter did not respond. Please wait a few minutes and refresh this page.