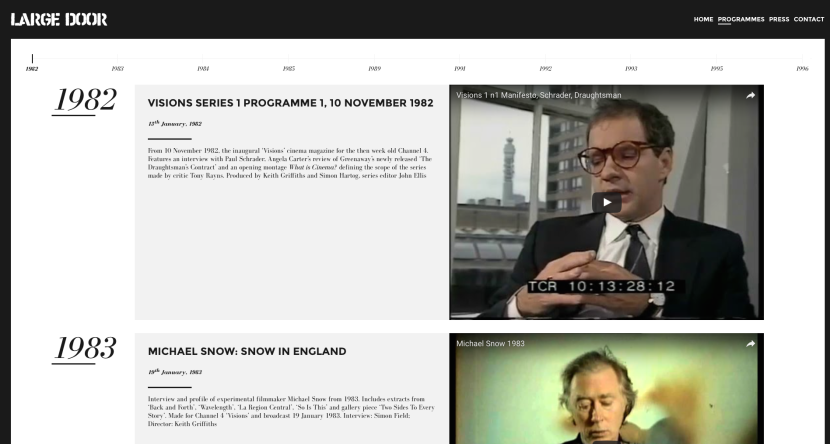 Large Door was founded in 1982 by Keith Griffiths, Simon Hartog and John Ellis as an independent production company to make programmes for the then new Channel 4. Large Door’s first commission was for Visions, an adventurous series of 15 programmes about world cinema. Visions eventually ran for 32 episodes until 1985, and subjects included a history of cinema in China, the work of Jan Svankmajer, contemporary cinema in Africa. Visions reported from the Cannes and Ouagadougou festivals and commissioned shorts from filmmakers including Chantal Akerman and Marc Karlin. Keith Griffiths left the company in 1984, but continued to make occasional films about cinema through Large Door including shorts on Raul Ruiz and the opening of the Frankfurt Film Museum.

From 10 November 1982, the inaugural ‘Visions’ cinema magazine for the then week old Channel 4. Features an interview with Paul Schrader, Angela Carter’s review of Greenaway’s newly released ‘The Draughtsman’s Contract’ and an opening montage defining the scope of the series made by critic Tony Rayns. Produced by Keith Griffiths and Simon Hartog, series editor John Ellis.

Large Door Productions made programmes for UK TV between 1982 and 1998. Founded by John Ellis, Keith Griffiths and Simon Hartog, Large Door produced 36 programmes in the Channel 4 ‘Visions’ series about world cinema. Ellis and Hartog continued to work through the company making programmes on food, TV in Brazil and other subjects as well as cinema. Simon Hartog died in 1992 and John Ellis continued closed the company when he returned to full-time university teaching in 1998. Ellis is now Professor of Media Arts and Royal Holloway University of London.

Sally Potter writes a beautiful, heartfelt foreword in Marc Karlin – Look Again, describing Marc Karlin as a cinematic pioneer, thinker and activist.  She also goes on to recall her first meeting with Karlin, after a screening of Nightcleaners, and how he kindly shared the Berwick Film Street Collective’s facilities while she was making her film, Thriller in 1979.

Here is an interview between Sally Potter and Wendy Toye, broadcast on Channel 4 on 9th May 1984. It was commissioned for the film programme, Visions (1983-1986). John Ellis, who co-produced the programme via his company Large Door, has very recently uploaded a collection of complete episodes from the series.  ‘So there is now a Large Door channel for our moribund independent production company, with a selection from the hundred or so programmes we produced’.

Two women directors of different generations – both trained as dancers – meet for the first time. Sally Potter’s first feature ‘Gold Diggers’ had just been released. Wendy Toye’s career began in theatre and she directed her first short ‘The Stranger left No Card’ in 1952. She worked for Korda and Rank, making both comedies and uncanny tales. Directed by Gina Newson for Channel 4’s Visions series, 1984.

Large Door was set up in 1982 to produce Visions, a magazine series for the new Channel 4. Initially there were three producers, Simon Hartog and Keith Griffiths and John Ellis. Visions continued until 1986, producing 36 programmes in a variety of formats. Hartog and Ellis continued producing through the company, broadening out from cinema programmes to cover many aspects of popular culture from food to television.

Visions was a constantly innovative series, and John Ellis’ article in Screen Nov-Dec 1983 about the first series gives a flavour of its range:

Especially during the earlier months of production, we vacillated between two distinct conceptions of the programme: one, the more conventional, to use TV to look at cinema; the other, more avant-gardist, to treat the programmes as the irruption of cinema into TV. […]

We found that virtually all of our programme items could be categorised into four headings:

1) The Report, a journalistic piece reflecting a particular recent event: a film festival like Nantes or Cannes, the trade convention of the Cannon Classics group.

2) The Survey of a particular context of film-making, like the reports from Shanghai and Hong Kong, and the critical profile of Bombay popular cinema.

3) The Auteur Profile, like the interviews with Michael Snow and Paul Schrader, Chris Petit’s hommage to Wim Wenders, or Ian Christie’s interviews with various people about their impressions of Godard’s work.

4) The Review, usually of a single film, sometimes by a literary intellectual, ranging from Farrukh Dhondy on Gandhi to Angela Carter on The Draughtsman’s Contract. About half the reviews were by established film writers, like Colin McArthur on Local Hero or Jane Clarke on A Question of Silence.

The third series of Visions, a monthly magazine from October 1984 added further elements. Clips was a review of the month’s releases made by a filmmaker or journalist (eg. Peter Wollen, Neil Jordan, Sally Potter) consisting entirely of a montage of extracts with voice-over. We introduced the idea of the filmmaker’s essay, borrowed from the French series Cinema, Cinemas, commissioning Chantal Akerman and Marc Karlin to do what they wanted within a limited budget and length. The plan to commission Jean-Luc Godard fell in the face of his insistence on 100% cash in advance with no agreed delivery date. And then there was no further commission.

John Ellis Broadcasting and the State: Britain and the Experience of Channel 4, Screen, May-August 1986 pp.6-23