Just before Marc Karlin’s death, film-maker Isaac Julien remarked, ‘The reason why his (Karlin’s) work is still screened, is because he is seen as like the Chris Marker or Jean Luc Godard of the British independent scene. He was more or less the only person representing that sort of voice, that sort of perspective’.

Indeed Marker’s reflection on images, the media and their relationship with memory and with human subjectivity are themes shared by Karlin. And in terms of form, both film-makers are key to deploy alternating commentaries on history and society, with private musings and recollections. It is a voice that constantly shifts in linguistic registers, adopting poetic and prosaic tones in order to shake an amnesia strikened history.

Marc called Marker ‘The Monk’, on account of his reclusive nature and mythical standing with his contemporaries. Up until his death last month, Marker rarely granted interviews, opting to leave calling cards such as pictures of cats or owls. It is clear that Marker was a key influence on Marc, but what has been forgotten is Marc Karlin and Chris Marker were actually long-standing-collaborators. He met Marker during May ’68 while Marker was working on Cine-Tracts (1968) with Jean-Luc Godard. Marker had just formed his film group SLON and had since released Far from Vietnam (1967),a collective cinematic protest with offerings from Jean-Luc Godard, Alain Resnais and Agnes Varda, inspired by the film-making practices of the Soviet film-maker, Alexander Medvedkin.

Born in 1900, Medvedkin was little known outside of his homeland unlike his contemporaries, Sergei Eisentstein and Dziga Vertov. Marker was drawn to Medvedkin after viewing his film Happiness (1934) in 1961, a satirical fantasy that promoted the benefits of collectivisation. The American writer Jay Leyda, who wrote Kino: A History Of The Russian And Soviet Film, introduced Marker to Medvedkin at the Leizig Film Festival in November 1967. This meeting resulted in Marker’s next film, Le Train en marche (1971) an attempt to explain the myth of Medvedkin’s kino-poezd/cine train, the impact it had on cinema and the practices it could inspire in democratic film-making.

Medvedkin saw his kino-poezd (294 days on the rails, 24,565m of film projected, 1000km covered) as a means of revolutionising the consciousness of the Soviet Union’s rural dwellers. Marker hoped his recent unearthing would incite similar political film-making. In London, Karlin and other kindred spirits joined Cinema Action.” There was a relationship to the Russians. Vertoz, the man and the movie camera, Medvedkin, and his agitprop Russian train; the idea of celebrating life and revolution on film, and communicating that. Medvedkin had done that by train. SLON and Cinema Action both did it by car. Getting a projector, putting films in the boot, and off you went and showed films – which we did”.

Marc recalls being asked to shoot the English version of Marker’s The Train Rolls On in the mid-1970s. “If Chris asked you to do something you did it: There was no question”. Marker instructed Marc to film at Peugeot car factory, where Marker wanted to make a film on car workers. He couldn’t go in person as he was known to the officials as an agitator. Working under the pretense he was making a film for the Common Market, Peugeot responsed by putting Marc and his crew in a luxury hotel in Paris.

Choosing not to approach filming the monotonous labour of the workers in a Godardian way, Marc found inspiration in how the workers for a few seconds would cease work,

“all they did was boom, boom, boom. Then I noticed that the workers on the assembly line would come up like fish for air. They would not touch, and they would open their mouths. The Peugeot people were so canny, because they would put together a Moroccan, Portuguese, French and an Italian, so no one could actually speak to each other because on one knew each other’s lanuguage. That was why an excessive amount of touching was going on. I said to the cameraman, ‘Look, that’s how we film. We don’t film the work, because we can show that in twenty or thirty seconds. But we can film these people gasping for air. Or touching, whatever’. That is what we filmed. And then the audience had to imagine. What does it take for somebody to come up for air like that? Or touch? Those are the questions; when you talk about images of labour, how do you film labour?” 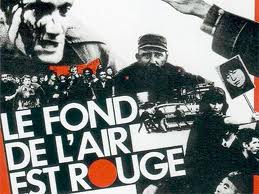 In the mid 1970s, Marker contacted left-wing filmmakers and groups to send him their offcuts. As Marker was ‘le maitre’, Marc agreed. Here Marc describes Marker’s studio upon a visit, “Chris had a garage, a huge studio with drainpipes all across it. It was vast, and he put these little rolls of films all along the drainpipes, and then divided it onto countries, so you had Columbia, Peru, Cuba, Africa and so on. I entered this garage to find all these films from all these countries: the whole world was there. Right at the end there was Chris Marker on a platform with his editing table, and he looked like God. You had to walk past these films to reach him and sit down”.

The film became Le fond de l’air est rouge (1977). It focused on the doomed optimism of left-wing activism from the second half of the 20th century. The ‘red in the air’ implying the socialist project only existed in the air, communicated only by a dream language. Again, Marc did the English version, A Grin without a Cat (1988) for Channel 4. Running shorter than Marker’s film and adding a new voice cast including Jim Broadbent and Cyril Cusack.

A Grin Without A Cat Channel 4 Contract. © The Marc Karlin Archive

Around this time, Marc, in need of political inspiration, wanted to make a film about Chris Marker that would use Marker’s images, entitled, I Am Writing To You From A Distant Country… In keeping with Marker’s style, it begins with a letter followed by a montage of stills and sequences from Letters From Siberia (1957), Le joli mai (1963), La jetée (1962) and Le fond de l’air est rouge (1977) . From the treatment, we see the intention – to locate a time-travelling Marker. Marc asks, who is this letter writer and traveller? How do we recognise him?.. What does he declare at customs? There are no photographs of him, no evidence other than his letters. He is a Martian, an astronaut, an 18th century time-traveller, a descendant of Vikings, a Marxist, a subversive, an old man of letters… There are traces but no apparition, we have the grin but no cat. But we know where he lives: in a house in Neuilly, painted outside with owls whose eyes glint in the dark…

Here is a rather faded, time travelling letter from Marc to the Monk, informing him of the project. It comes at a time where Marc is creatively and politically jaded – in ‘Thatcher’s trough’. 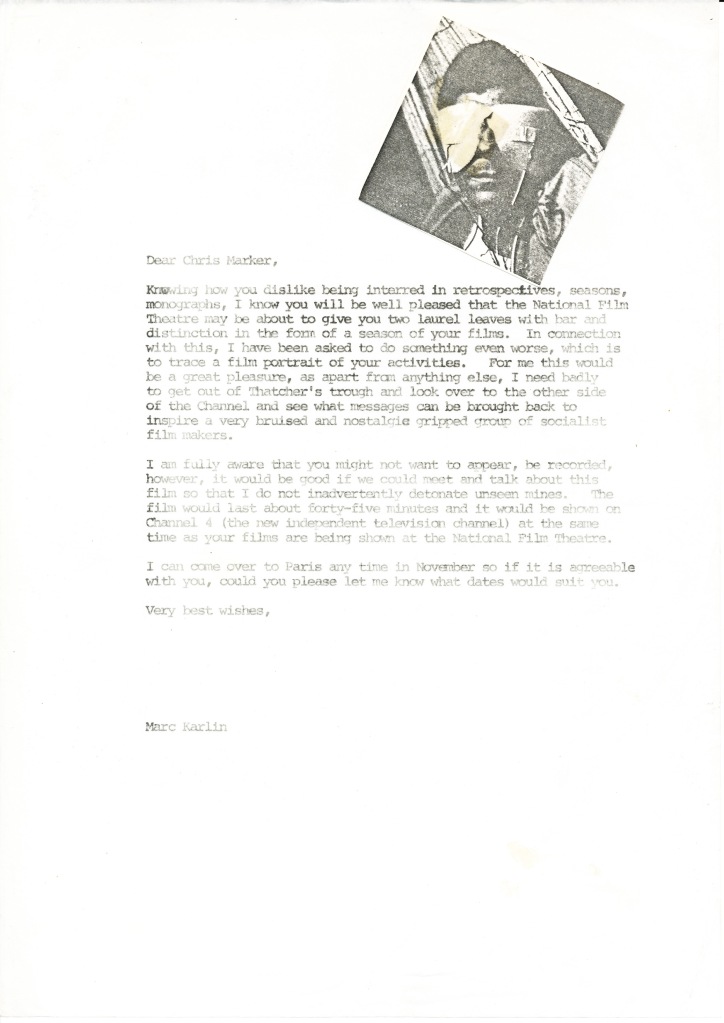 The film never materialised, undoubtedly sucked into a black hole. Undettered, Marc ploughed into his next project, Between Times (1993). Possessing dialectic discsussive voice-overs, Between Times is a clear nod to Marker. The film’s main focus is on the Thurcroft miners failed attempt to buy their colliery from British Coal and the search for fresh alternatives after the devisive general election defeat for the left in 1992. This new perspective draws optimism from the educational ethos at Northern College, a residential college dedicated to the education and training of men and women who are without formal qualifications. The film observes a key moment in the shifting attitudes and aspirations among the working class in Britain at the time and recalls a May ’68 slogan,

le pain pour tous mais aussi / bread for all but

The slogan is actually taken from a strike in March 1967 at the Rhodiaceta textile factory in Bresancon, France. The workers were not merely demanding higher wages but challenging the core oppression within capitalist society; wages yes, but what about education and cultural life? Chris Marker entered the strike on March 8 1967, resulting in the documentary À bientôt, j’espère (1967) (see below, sorry no Eng Subs) filmed by Marker between March 1967 and January 1968 with the Communist filmmaker Mario Marret and the SLON team.

As Trevor Stark points out in his excellent essay, “Cinema in the Hands of the people”; Chris Marker, the Medvedkin Group, and the Potential of Militant film, the film À bientôt, j’espère emphasises the liberating experience of laying claim to sectors of life inaccessible to the worker: to creativity, to culture, to communication. Forty-two minutes into the documentary we see Pol Cébé, a factory worker from the working class district of Palente-les-Orchamps who had established a cultural programme for the local community and had regenerated the factory’s library with classic Marxist and Communist texts, in close-up state,

For us culture is a struggle, a claim. Just as with the right to have bread and lodgings, we claim the right to culture – it’s the same fight for culture as for union or in the political field.

À bientôt, j’espère is left purposley open-ended with little resolution, marked tellingly by Pol Cébé reciting the documentary’s title À bientôt, j’espère – ‘Hope To See You Soon’. The strike at Rhodiaceta achieved nothing but the broadening of class concsiousness that consequently lit the test paper for the events in Paris the following May. These concerns are resuscitated in Between Times. The miners are halted in their plan to buy their colliery and are pointed to the development of technology for optimism. Sadly, Marc Karlin observes the irony that before, a dream language could still be spoken, now the dreams are possible we no longer know how to speak it. Like À bientôt, j’espère, Between Times ends without a dialectical antithesis, leaving all but tension.

So he decided to keep his voices, make them argue, merge, split again. Be on high and on the ground. Anything to keep that sleepy logic at bay. But then there were those who were doing this all along…

These words are spoken over a slow tracking shot of a wildlife garden revealing in the foreground, a golden egg – Marker’s owl.

“Cinema in the Hands of the people”; Chris Marker, the Medvedkin Group, and the Potential of Militant film, T, Stark, (mitpressjournals:2012)