On October 21 1967, over 100,000 marchers assembled in Washington D.C. for the Mobilization to End the War in Vietnam protest. It was the largest anti-war gathering yet, bringing together a wide cross-section of liberals, radicals and hippies. For many, this marked the transition from simple anti-war demonstration to direct action that aimed to stop the war machine. Chris Marker was there with a camera.
France 1968 Dir Chris Marker 28 min

In collaboration with Whitechapel Gallery and Ciné Lumière. The Whitechapel hosts the first UK retrospective gallery exhibition of his work.

In a post last year, I traced the lost history of Marc Karlin’s collaborations with Chris Marker. It is over a year since Marker’s death and in tribute, stirred by the BFI’s Film Essay season in August, here is a collection of Marker related videos. Firstly, a visual essay from Criterion exploring the soundscape of Chris Marker’s 1962 landmark La Jetée, written by Michael Koresky of Reverse Shot.

Codirected by Frank Simeone and John Chapman, Junkopia was filmed at the Emeryville Mudflats outside of San Francisco while Chris Marker was also shooting the Vertigo sections of Sans Soleil.

Toute la mémoire du monde (1956) is a 20 minute bout of archive fever administered by Alain Resnais. Resnais takes us behind the scenes of the Bibliothèque nationale de France in Paris, conceiving a key theme of the film essayist; the fragility of memory and the need to remember. In the opening credits Marker, a man of many aliases, is introduced as Chris the Magic Marker –  that most democratic of public writing tools as Finn Burton puts it in Future Anterior,

That Resnais documentary follows one book into the Bibliothèque Nationale and thence into the hands of a reader, and the book happens to be one of the Petite Planète series of travel books, a series founded and edited (1954–58) by Marker. ‘Not a guidebook,’ Marker promised, ‘not a history book, not a propaganda brochure, not a traveller’s impressions, but instead equivalent to the conversation we would like to have with someone intelligent and well-versed in the country that interests us.’ Perhaps, then, something like the letters Sandor Krasna sends from his travels to his unnamed correspondent (voiced with limpid calm by Alexandra Stewart) in Sans-soleil (1983). Marker did much of the graphic design and layout work for the series as well, and every cover was a different picture of a woman, some looking away and lost in their own thoughts, others gazing into the camera, reserved and enigmatic. In Remembrance of Things to Come (2001), Alexandra Stewart, speaking again on behalf of Marker, says of the work of Denise Bellon, ‘Being a photographer means not only to look but to sustain the gaze of others.’ ‘Have you heard of anything stupider’, she says, quoting a letter of Krasna’s from Fogo in the Cape Verde islands, ‘than to say to people, as they teach in film schools, not to look at the camera?’ There is a woman, gazing slightly off-camera, on the cover of the Petite Planète edition (#25) that has arrived for cataloging in the Resnais film. Her hair is in an elegant black bob, she wears a simple black garment; the book, its title announces, is a traveller’s guide to Mars. She is perhaps the first of Marker’s many characters who address us, unexpectedly, from the future. They look back on our present moment and, in doing so, transform it, as we now transform the past, our memories, our recordings. (‘I wonder how people remember things who don’t film, don’t photograph, don’t tape.’) 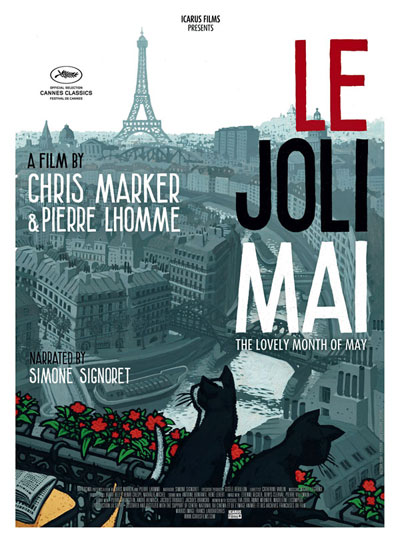 In April Icarus Films announced its acquisition of all North American distribution rights to Chris Marker and Pierre Lhomme’s landmark 1963 film Le joli mai. This film had been unavailable for many years and it is now newly restored. It will be screened at several major film festivals and premiered in New York at Film Forum on September 13, 2013, presented in DCP, made from a new 2K scan. The restoration work on Le joli mai was done according to the wishes of Chris Marker and supervised by Pierre Lhomme, the film’s cinematographer and co-director. First off is Lhomme commenting on the restoration process, followed by the new trailer.

LE JOLI MAI is a portrait of Paris and Parisians shot during May 1962. It is a film with several thousand actors including a poet, a student, an owl, a housewife, a stockbroker, a competitive dancer, two lovers, General de Gaulle and several cats. Filmed just after the March ceasefire between France and Algeria, LE JOLI MAI documents Paris during a turning point in French history: the first time since 1939 that France was not involved in any war. Icarus Films

In Sight & Sound’s glorious celebration of the life and work of Chris Marker last year (Vol. 22 Issue 10 Oct 2012), a number of filmmakers, including Jem Cohen, Thom Anderson, Patrick Keiller, Chris Petit, Sarah Turner and Kodwo Eshun, paid tribute to the man. The US filmmaker John Gianvito proclaimed that any filmmaker who has ventured into the film essay territory in the past 55 years owes a great debt to Marker, and befittingly includes Marc Karlin.  Introduced to Karlin’s work by Marker, Gianvito states Karlin is in need of the same recovery Marker bestowed the Soviet filmmaker Alexander Medvedkin. 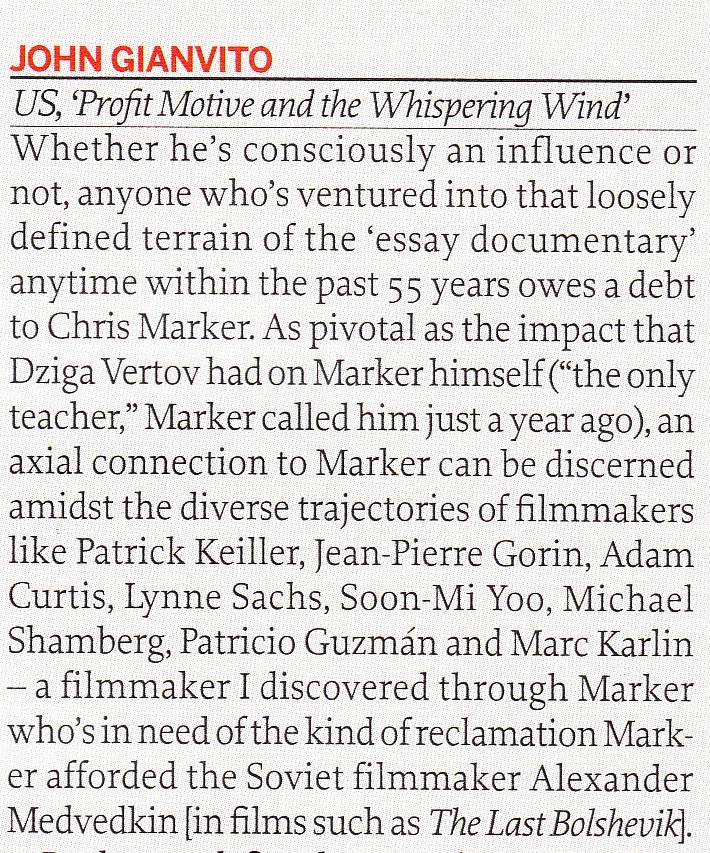 John Gianvito’s most recent ouput is the collective film Far From Afganistan (2012), made with filmmakers Travis Wilkerson, Jon Jost, Minda Martin and Soon-Mi Yoo. The film is clearly inspired by Loin Du Vietnam (Far from Vietnam) (1967), a collaboration between Alain Resnais, Claude Lelouch, Jean-Luc Godard, William Klein, Joris Ivens, and Agnès Varda, conceived as an outcry against the Vietnam War. Marker edited together William Klein’s films of pro- and anti-war protests in New York, Joris Ivens’ own North Vietnam footage; additional material by Agnès Varda and Claude Lelouch and Resnais and Godard’s self-contained sequences. From this prototype, Far From Afghanistan mixes fictional narrative, found footage and reportage in response to a protracted war that remains far from the collective consciousness. Here are both trailers, side by side. (Look out for Marker’s owl in Far From Afghanistan).

Next is a video postcard Agnes Varda made for her friend Chris Marker presented at the Rencontres de la Photographie in Arles in 2011 and her glimpse inside Marker’s studio. Marc Karlin too describes Marker’s studio upon a visit around the editing period of Le Fond de l’air est rouge (1977).

“Chris had a garage, a huge studio with drainpipes all across it. It was vast, and he put these little rolls of films all along the drainpipes, and then divided it onto countries, so you had Columbia, Peru, Cuba, Africa and so on. I entered this garage to find all these films from all these countries: the whole world was there. Right at the end there was Chris Marker on a platform with his editing table, and he looked like God. You had to walk past these films to reach him and sit down”.

Last year in an article written for Sight & Sound, Patrico Guzman recalled his first meeting with Marker and recounts his debt of gratitude that he owes to his mentor while filming Because The First Year. Nine years before their first meeting, Guzman and Marker collaborated, from a distance (Guzman with camera and Marker on script) on Joris Iven’s film …A Valparaíso (1962).

In 1962 Joris Ivens was invited to Chile for teaching and filmmaking. Together with students he made … A Valparaiso, one of his most poetic films. Contrasting the prestigious history of the seaport with the present the film sketches a portret of the city, built on 42 hills, with its wealth and poverty, its daily life on the streets, the stairs, the rack railways and in the bars. Although the port has lost its importance, the rich past is still present in the impoverished city. The film echoes this ambiguous situation in its dialectical poetic style, interweaving the daily life reality (of 1963) with the history of the city and changing from black and white to colour, finally leaving us with hopeful perspective for the children who are playing on the stairs and hills of this beautiful town. ivens.nl